Due to the current situation regarding COVID-19, the Louis A. Vucci, P.A. staff is working remotely until further notice. During this period, please rely on email as your primary method of contacting us.

A routine inspection by two inspectors from the Centers for Disease Control and Prevention uncovered unsanitary conditions aboard the Carnival Cruise Line’s ship, the Triumph. The CDC gave the 2754-passenger ship a rare failing grade for more than two dozen violations. Most cruise ships owned and operated by the major cruise lines routinely pass health inspections, scoring 86 points or more out of 100.

Inspectors found flies in food prep areas and at beverage stations, food items like milk, eggs, and cheese stored at temperatures above the 41-degrees-or-less guidelines, soiled water fountains, and general disrepair in food areas. These issues all led to an inspection score of 78 out of 100 for the cruise ship.

The cruise line, based in Doral, Florida, issued a statement saying that it has corrected the issues noted in the report and has requested an immediate re-inspection. People may remember that the Carnival Triumph was in the news in 2013, when it suffered engine failure at sea, stranding guests on board and leading to unsanitary conditions. That fateful event led to extensive media coverage and negative publicity for the ship and the cruise line.

The Triumph now sails from New Orleans, and while the cruise line claims the issues have been addressed, we are still monitoring the situation. It is the responsibility of cruise lines to protect guests from harm and keep conditions as sanitary as possible for those aboard. If they fail to do so and you become ill as a result, you may be eligible to pursue legal action.

For more on this story, read more at The Miami Herald. We will keep you updated on any new developments.

Have you ever wanted to visit the Galapagos Islands? How about doing so in luxury and style? Well, if that trip has been on your list of things to do, Celebrity Cruises may have an option that you would enjoy. The Miami based cruise company announced that it is building a specialty ship named the Celebrity Flora that will sail to the famous archipelago located off the coast of Ecuador. This custom-built ship specifically for this particular voyage is a small-ship design which will hold only 100 passengers. Unlike the larger ships with interior rooms, balcony rooms, and suites, this ship features an all-suite design, with large floor-to-ceiling glass windows on entire decks of the boat, designed for viewing and connection with the beautiful surroundings. 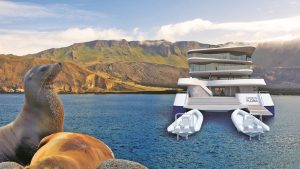 The new trend in cruise ships of this size, known as “expedition vessels” includes high-end amenities without all of the crowds on larger cruise ships. The Celebrity Flora will have two dining rooms, outdoor casual spaces, cabanas on deck that can be used to lounge under the stars, and three educational areas where passengers can learn more about the flora and fauna of the famed Galapagos islands.

Adventure and expedition cruises are becoming more popular, according to cruise industry insiders. It is likely that people are starting to gravitate to these smaller tours, with more personalized attention and fewer crowds. The educational and exploratory nature of cruises like this one likely appeal to those who are not looking for just a good time, but want to learn something along the way.

To learn more about the new cruise from Celebrity Cruises, read the entire story at the Miami Herald.

Miami, Florida-based Royal Caribbean Cruises Ltd. is pulling out of Latin America amid worries that the region is weakening in terms of market share values.

The company released its fourth quarter earnings, revealing a net income of $228.8 million or $1.03 per share, down from $490.2 million or $2.19 per share during the same period last year. Royal Caribbean chief financial officer Jason Liberty, who noted that Latin America consists of 10% of the company’s business, said that “these economies are lackluster at best,” with Brazil “becom[ing] problematic.”

Royal Caribbean is optimistic that China, which is currently its third-largest market, will jump up to its second-largest market in 2016 behind North America.

Fellow Florida-based Carnival Cruise Lines also has its eye on China, according to an October 13 announcement that it will launch its Carnival Cruise and AIDA Cruises brands there by 2017, increasing its exposure to the region by 58%.

While these recent announcements indicate potential growth in the cruise ship market, these companies are frequently set back by major outbreaks of illness, injuries, and wrecks that cause harm to their passengers. If you have been the victim of such an incident, the attorneys at Louis A. Vucci P.A., want you to understand that you have rights when it comes to recovering compensation for your suffering. Call us at (786) 375-0344 to discuss your legal options today.

Celebrity chefs have now found a new avenue for their culinary masterpieces – instead of cooking for customers on land, some are opting to tempt the palates of cruise ship passengers for a more revolutionary experience. This is also an added benefit of cruise ships being able to add signature restaurants to their list of cruise ship attractions.

Stone will be opening a new restaurant concept called Share on two Princess Cruises ships this year and launching two more in 2016. The theme of the restaurant is a pass-the-plate type of meal-sharing setting, inviting a homey atmosphere reminiscent of dining at home instead of at a fancy restaurant.

Menu items include twice-cooked duck leg with fennel, tagliatelle with roasted Alaskan crab, chili and parsley, and butter-roasted lobster with carameralized endive and endive foam, among others.

Our attorneys at Louis A. Vucci P.A. provide competent and reliable legal services to victims of cruise ship accidents in the United States. To find out more about the legal services we offer or to consult a member of our legal team regarding your case, call our offices today at (786) 375-0344.

This announcement came late in July, months after Crystal Cruises was bought by Hong Kong-based investment company Genting Hong Kong. Crystal chairman Tan Sri Lim Kok Thay illustrated the company’s plans, saying, “our intent is to make Crystal Cruises the core of what will become the world’s premier luxury hospitality and lifestyle brand portfolio, not only for the immediate future but for years to come”.

Travelling in a cruise ship can lead to unique injuries that many don’t account for when planning a trip, such as accidents or abuses. If you have been harmed or injured on a cruise ship, you are not alone. Get in touch with our attorneys today at Louis A. Vucci P.A., by calling our offices at (786) 375-0344.

According to the Associated Press, a federal appeals court has turned down a request to reconsider the decision to allow cruise ship passengers to sue for medical malpractice.

The 111th U.S. Circuit Court of Appeals rejected an appeal by Royal Caribbean Cruise Lines to revisit the ruling; Royal Caribbean still has the option to appeal to the U.S. Supreme Court.

In addition, this decision reversed 100 years of precedent that granted immunity to cruise lines from medical negligence litigation. The ruling that was initially made late last year came after a man died from a head injury on a cruise, opening up the door for cruise ship passengers to sue for any injuries they may have wrongly sustained on board.

If you or someone you love has been harmed by the negligent actions of a cruise ship company, please feel free to contact the legal team of Vucci Law Group, P.A. by calling (786) 375-0344.

Royal Caribbean is setting a new bar for cruise lines as they make aggressive moves to raise their international brand. They’ve developed a high-tech class of ships filled with technological innovations that set them apart from their competitors. As part of their global expansion plan, this Quantum ship will start a new line in China with home port in Shanghai, a development that has been made possible by Royal Caribbean’s joint venture with a Chinese travel company, Ctrip. This major international push, alongside a 42-ship global expansion, will ideally create a national cruise line for China and is set to double Royal Caribbean’s earnings by 2017. Royal Caribbean already has competition in China, but none are offering brand new ships like those Royal Caribbean has due to release.

Royal Caribbean recognized the pressure the tourism business has experienced the past few years and saw an opportunity to actually increase their ship volume and itinerary lists. They announced their “double-double” program in July, and since that announcement with initiatives to increase the company’s return on invested capital, Royal Caribbean’s stock price has increased by 40 percent.

Royal Caribbean aims to add more luxury elements to their new cruise ships, due to release by 2018 and 2020. Making their image more upscale with the Quantum ship-line will ideally attract more passengers and bring in more money, offering more high-tech features and accommodations that justify higher fares. They are pioneering elements aboard the Quantum such as sky-diving simulators, bumper cars, roller skating, and an enclosed SeaPlex activity area. By putting forth the best technology in the market right now, Carolyn Spencer Brown, editor in Chief of CruiseCritic.com, believes Royal Caribbean is really committing to a market that is “ultimately going to revolutionize the industry.”

Such massive expansion opens the cruise industry up to more passengers, more itineraries, and more destinations. However, with such technological advancements aboard new ships, there is the inevitable risk that passengers will be susceptible to new injuries. The cruise ship lawyers at Louis A. Vucci P.A. are prepared to help those who have been injured or who have fallen ill due to wrong-doing or negligence aboard a cruise ship. Contact us at (786) 375-0344 for more information.

SEPTEMBER 29– A 20-year-old man has died after falling from the forward mast of a cruise ship as it was on its way back to the port of Miami.

Miami-Dade police has identified the victim as 20-year-old North Carolina native and Clemson University student, Kendall Wernet. According to investigations, Wernet along with five or six others climbed the ship’s mast to catch the sunrise, dodging several clear warning signs on their way up. As they were gathered on the Carnival Ecstasy’s mast, the radar system was turned on and apparently caught Wernet, causing him to fall 20-feet onto the deck below.

Evidence points to this unfortunate incident as an accident, with no proof that there was alcohol or foul play involved.

Our entire Miami based legal team at The Vucci Law Group, P.A. sends our condolences to Kendall’s friends and family in this unfortunate time.

Royal Caribbean’s Quantum of the Seas to feature North Star

This November, Miami, Florida-based Royal Caribbean International will be launching the North Star, a glass capsule designed to lift as many as 13 guests at a time 300 feet above the ocean, on their new Quantum of the Seas ship.

Other features of the 1,141-foot long, 16-decked ship Quantum of the Seas include a sports and entertainment complex complete with bumper cars, skydiving simulations, and a surfing simulator known as FlowRider. Quantum of the Seas is expected to launch on November 23, and will have the capacity to hold around 4,180 guests. It will travel a route between the Caribbean and New York City.

Cruise ships can provide guests with incredible opportunities for excitement and adventure, but unfortunately, cruise ship passengers may also be exposed to dangerous injuries or illnesses. If you or someone you love has suffered a cruise ship injury or illness, seek the legal help of our attorneys at the Vucci Law Group, P.A., by calling (786) 375-0344.